What does the rise of artificial intelligence mean for the world of work?

First, it’s clear that it’s a huge opportunity for increased productivity. Gartner believes that this year alone, half a billion users will save two hours a day using artificial intelligence—that’s up to half a million years of improved efficiency!

McKinsey has estimated the percentage of various work tasks and sectors that could now be automated using new technology. After predictable physical work (which can increasingly be done by robots) the biggest opportunities are in mainstream business tasks such as data collection and data processing. McKinsey believes that over 60% of these tasks could now be automated.

Given these efficiencies, it’s only natural that some worry about the effects on employment. The good news is that, so far at least, these technologies have been displacing work rather than replacing workers.

In other words, machine learning excels at replacing the more boring and repetitive aspects of knowledge work—freeing workers to spend time on more rewarding and empowering tasks.

The Payoffs of Machine Learning for Workers Made Simple

An analogy can help illustrate the point. Remember when you were a child, and you had to spend months learning to do long division? After a while, to your relief, you were allowed to use a calculator. Far from slowing your ability to do mathematics, it freed you to move on to more complex and challenging tasks. Machine learning is doing the same for daily work in enterprises worldwide.

For example, machine learning has proved successful at automating repetitive finance tasks such as the automatic matching of invoices and payments, increasing rates from 70% to 94% in just a few weeks—resulting in massive savings in time and effort.

Machine learning also helps augmented human intelligence. For example, a sales person can now receive more intelligent lists of potential prospects—based on historic patterns, algorithms can automatically provide information about which prospects are most likely to buy, what products they are most likely to purchase, how long the deal is likely to take, etc. The end result is that every sales person gets closer to the best in the organization.

Indeed, we may be at the dawn of a new golden age for knowledge workers. Just as the invention of tractors multiplied physical labor, allowing a single farmer to plough many fields in a fraction of the time, these new technologies will do the same thing for knowledge workers, allowing them to multiply efforts in ways it is hard for us to currently imagine.

A Net Increase in Jobs—for Everyone?

But what about non-knowledge workers? Since the dawn of time, new technologies have been greeted with skepticism (Socrates famously feared that books were a bad idea because students would no longer have to use their memory). But the result has consistently been richer societies. For example, thanks to mechanization, the number of farm workers in the US has gone from 83% in 1800 to less than 2% today—but few of us would like to return to that era.

Clearly, some workers and jobs will be affected. But there’s reason to believe that we shouldn’t be too pessimistic. Generally, we’re very good at thinking about jobs that will be lost to automation, but it’s much harder for us to imagine the new jobs that will be created thanks to the new opportunities.

A study by Gartner shows that machine learning will result in a net increase in jobs from the year 2020. And in fact, it may be earlier: another study shows that in companies using AI today, 26% report job increases, compared to just 16% saying that it has reduced jobs.

There’s a tendency to think that the new jobs created will inevitably only go to the highly-skilled — for example, increased use of machine learning has led to increased demands for data scientists.

But history gives a rosier view. New technology also enables people to do jobs that they wouldn’t previously have been qualified for. For example, to work in a general store a century ago, you would have had to be able to do fast mental arithmetic, in order to calculate the amount of the bill. The advent of cash registers meant that stores could hire people for their customer service skills, rather than their mathematics prowess. 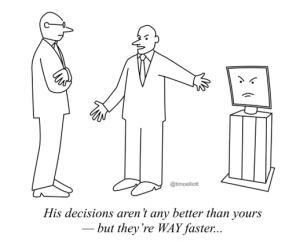 Machine learning is making computers easier to use in many different ways. For example, new enterprise digital assistants let us access the information we need to do our jobs faster and easier than ever before (think of how Jarvis in Iron Man” helps Tony Stark do his job faster). This will enable workers to do more with less effort and resources than in the past.

This process has happened many times in the past. For example, the spinning jenny was introduced in the UK in 1760. It automated the process of spinning, drawing, and twisting cotton. But the lower costs and higher demands for cloth meant that far from reducing employment, the number of workers exploded from around 8,000 skilled artisans to more than 300,000 less-skilled workers a few decades later.

Ultimately, the rise of artificial intelligence will raise the premium on tasks that only humans can do. Because repetitive intellectual tasks can increasingly be automated, skills like leadership, adaptability, creativity, and caring will become relatively more scarce and more important.

Instead of forcing people to spend time and effort on tasks that we find hard but computers find easy (such as mental arithmetic), we will be rewarded for doing what humans do best—and artificial intelligence help make us all more human.