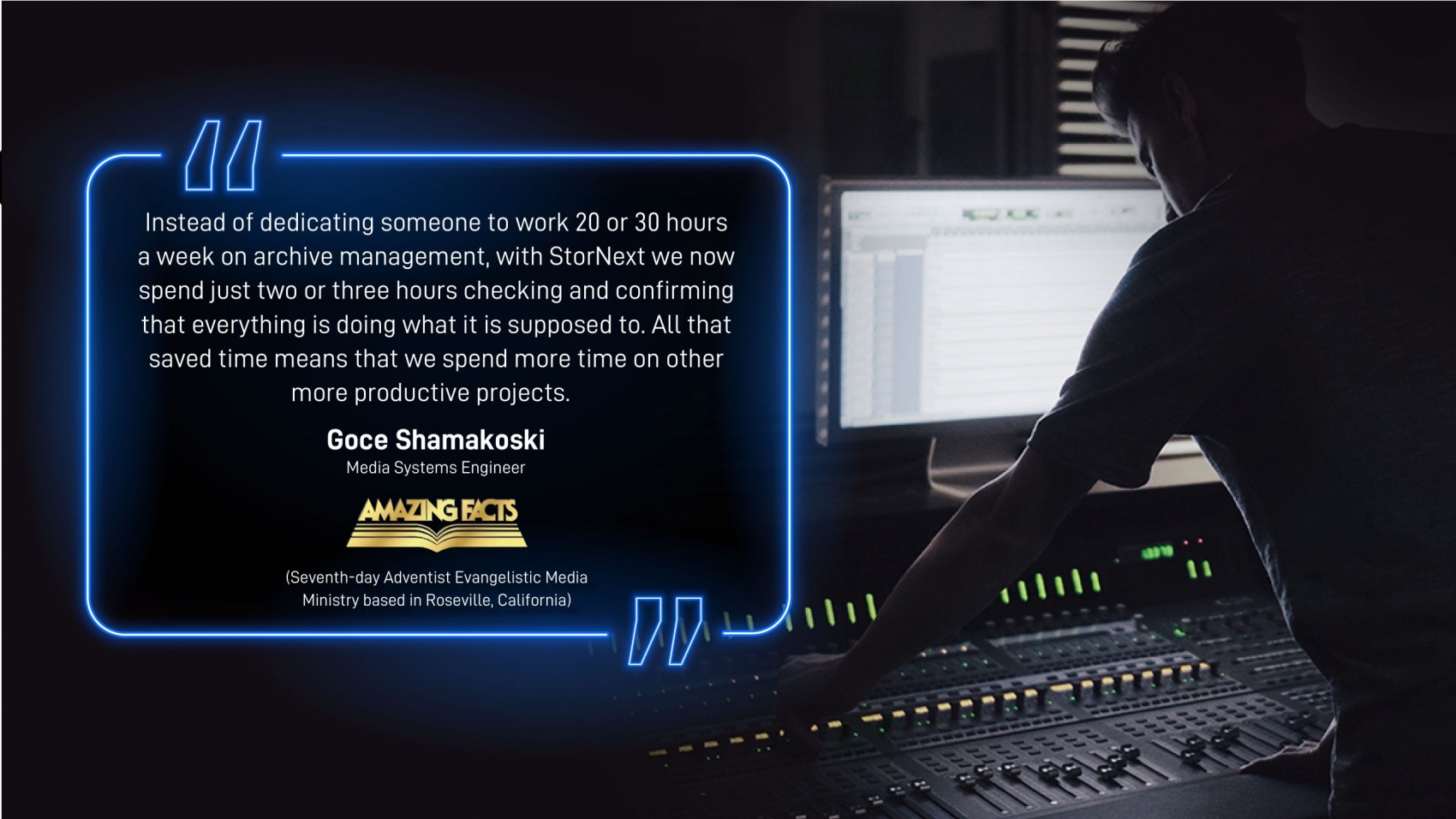 Begun in 1965 as a set of 15-minute radio segments combining science, history, and biblical teaching, Amazing Facts has grown into one of the largest religious broadcast ministries in the United States. Today the Sacramento, California–based organization airs weekly programming over more than 150 radio stations and a variety of over-the-air, cable, and satellite television platforms. It also produces its own original, special productions. In its more than 50 years of religious broadcasting, the Amazing Facts media team has continued to create and broadcast content through seismic changes in technology— and one of its constant challenges has been updating its infrastructure and workflows to keep up with, and take advantage of, changing technology. The television side of the house has seen the biggest changes.

“Ever since we moved to a file-based workflow, we have constantly wrestled with the problem of how to store, protect, and reuse the content we create,” explains Goce Shamakoski, Media Systems Engineer at Amazing Facts. The Mac-based production team installed an Xsan storage network and shared disk storage as an early solution to the problem. “Xsan let editors collaborate on projects—something that was extremely difficult in our earlier system—but over time we began to see its limitations,” says Shamakoski. The major issue was increasing data volumes. “When we record a service, we use five cameras to give us maximum flexibility and impact,” says Shamakoski, “and the result is that a typical hour-long program uses about half a terabyte of disk space.” The storage filled up quickly, additional disk resources were expensive to add, and—compounding the problem—some of the suppliers shifted their emphasis away from the media storage market and stopped supporting the solution. A particularly difficult issue was how to store older content that needed to be reaccessed for later use. “There was no integrated archiving function, so we wrote content off to LTO tape using a manual drive—and it was painful,” Shamakoski remembers. “We dedicated a part-time admin just to manage the archiving operation. It consumed 20 to 30 hours a week, and even then, it took us days to retrieve content to repurpose.”

The IT team at Amazing Facts started looking for a new system, asking Advanced Systems Group (ASG) for help. ASG is an Emeryville, California integrator with specific expertise in media workflow. The team had several priorities for the new solution. Key factors were scalability and the ability to integrate archiving and data protection into the workflow. Flexibility over time was also critical since the team knew the system would need to change and grow in the future as new media formats and platforms were developed. “We also wanted to find a long-term partner,” explains Shamakoski, “one who was committed to this industry and could provide the support that we needed both at the installation phase and through future operations.” Compatibility with the existing Xsan platform would also be a major advantage to make the transition as nondisruptive as possible.

RESEARCH AND REFERENCES POINT TO STORNEXT

ASG recommended looking at a Quantum’s StorNext solution, but the team at Amazing Facts needed to be sure that it was the right choice for them. “We looked at every supplier of storage systems we could find, but didn’t find anybody else who could give us high-performance collaborative workflow and integrate archiving, too,” notes Shamakoski. “We also talked to lots of StorNext users. Some of them were Fortune 100–class customers and others were shops closer in size to us, with our 10 edit bays.” StorNext was the clear winner. “Everybody was enthusiastic about StorNext—and it was clear that Quantum was committed long-term to supporting this market with continued product development and experienced service teams.”

The new solution included a StorNext M440 series metadata controller, 150TB of high-performance Quantum QXS RAID storage, and a StorNext AEL500 Archive library with LTO tape technology to provide 500TB of capacity. The Quantum and ASG support teams installed the new system. “We counted on StorNext’s compatibility with Xsan and hoped for an easy transition, but we were understandably a little nervous about it,” says Shamakoski. As it turned out, the switchover was perfectly smooth. “The upgrade team started working on Friday evening, and by Monday morning when the editors came into work, StorNext was up and running, and all the material from our Xsan was there and ready to work on in the same folders. The only thing they had to do differently was access the volume under a different name.” The new StorNext solution gives editors the same shared access to files that they had under Xsan using the existing Fibre Channel switch—but now, protecting and archiving content is a fully automated process carried out by StorNext Storage Manager, a policy-based data migration engine that manages data movement between storage tiers. “As soon as we ingest any content, the system automatically creates two copies on tape in the AEL Archive,” Shamakoski explains. One of them is vaulted off-site for disaster recovery protection while the other one stays in the library. “As our online disk fills up, we reclaim the disk space by removing the files that have not been recently accessed, but we leave the nearline copy on tape as an active archive.” Editors can see all the files they have access to through the standard Mac file system. When they open a file, it will either be available on disk or loaded back from tape to disk automatically.

“The difference that the StorNext integrated archive has made to our work is huge,” says Shamakoski. “Bringing content back to be repurposed, a process that used to literally take us days, now happens in minutes or hours.” And administrative overhead has been reduced by a factor of 10. “Instead of dedicating someone to work 20 or 30 hours a week on archive management, with StorNext we now spend just two or three hours checking and confirming that everything is doing what it is supposed to. All that saved time means that we spend more time on other, more productive projects.” Reliability has been nearly 100%, and the service has been exemplary. “We haven’t had any issue that interrupted production since we installed the system nearly three years ago, and minor issues—when they did come up—were resolved quickly by either Quantum or ASG.” The team at Amazing Facts has started recommending StorNext to other organizations, too.

For Amazing Facts, one of the most important StorNext features is the added protection that the archiving systems provide. “Having a copy created of everything as soon as we ingest it is a great improvement,” says Shamakoski, “and we really like the Storage Manager Vault feature. It flags tapes for off-site storage and keeps track of them.” The StorNext AEL Archive also includes an Extended Data Life Management (EDLM) feature that validates the integrity of data on tape by loading media into drives and checking for error rates. “We run a media integrity check before we off-site any tape, and if the archive starts to see any sign of deterioration, StorNext writes the files to new media. It really gives us high confidence.” The Amazing Facts team is starting to look at how it will expand the StorNext environment as part of a two-year project to move into a new, larger facility. “We know we will need more capacity and speed as our content grows, and we shift to 4K workflow—and StorNext will let us expand our existing system to support those needs,” says Shamakoski. The team is also looking at other options, including support for the cloud and using hybrid storage—adding a layer of solid-state disk (SSD) to a RAID array to support the high I/O operations of the special effects content creators. “We don’t know exactly what our future needs will be, but we like the fact that StorNext gives us so much flexibility,” says Shamakoski.