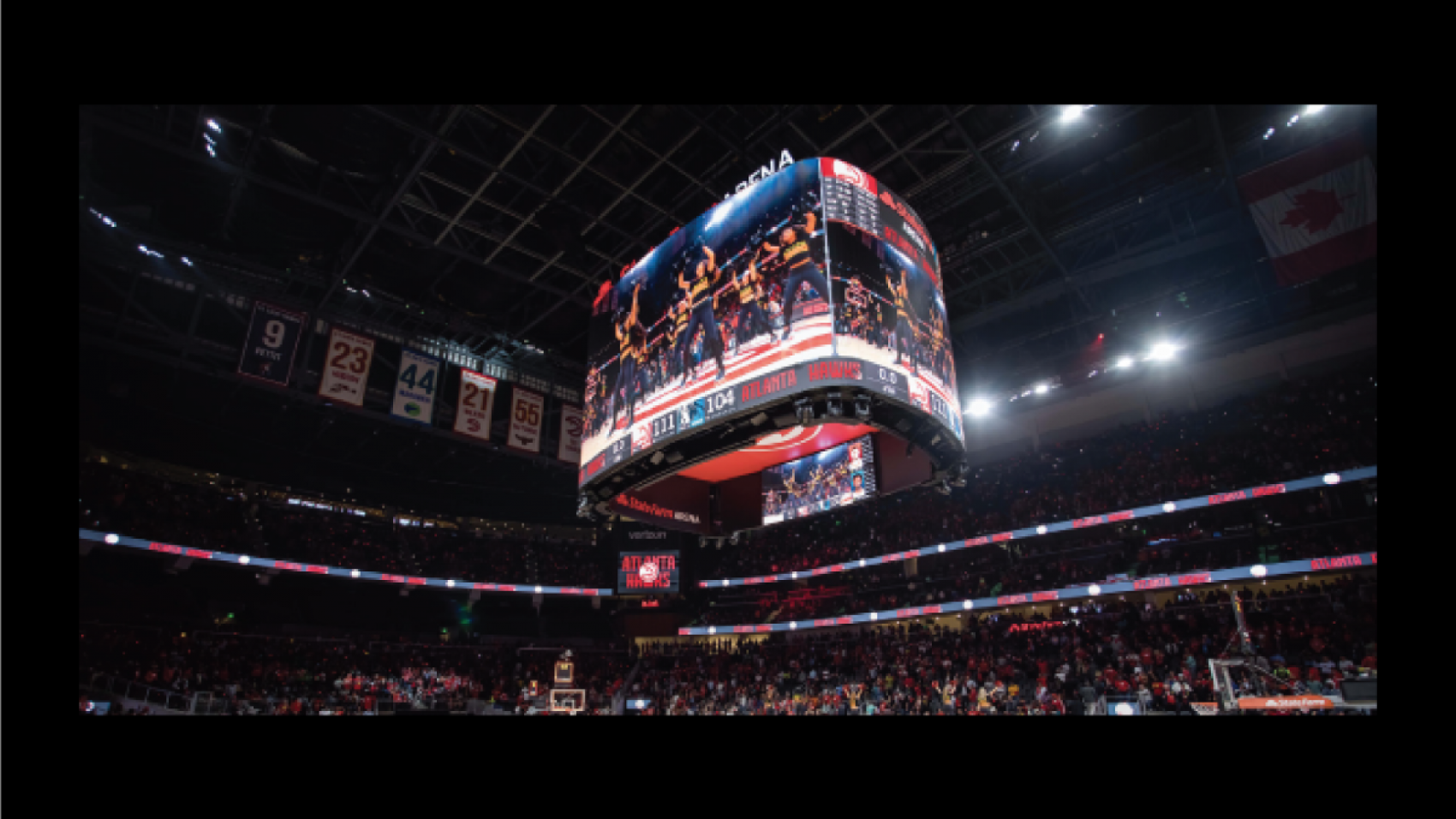 The Atlanta Hawks began the 2018-2019 basketball season with an unparalleled home court advantage: the State Farm Arena where they play in Atlanta, Georgia just underwent the second-largest renovation in NBA history. The transformed arena showcases over ten times more LED video than before, including the NBA’s first 360-degree video screen. It’s also the first arena bowl to be outfitted with HD-quality, 6mm LED video display technology, which will allow for the best fan viewing experience in any NBA venue. Now, no matter where fans are sitting in the arena, they’ll feel like they have court side seats.

In order to provide the best possible experience for fans, the State Farm Arena – home to the NBA’s Atlanta Hawks – decided to undertake a roofline to baseline, $192.5 million renovation. As part of the transformation, the team wanted to expand on its previous digital display footprint to allow fans to feel totally immersed in the game, no matter where they were sitting. To achieve this goal, the Hawks turned to Prismview, a subsidiary of Samsung that specializes in products designed to enhance the fan experience.

Massive Center-hung Video board with NBA’s Largest 360-Degree Display
The centerpiece of the arena’s renovation is their new center-hung video board. It includes a massive 4,477 square feet of high-definition video display, making it almost 4,000 square feet largest than the previous center-hung video board and one of the top three largest in an NBA venue. The 360-degree screen wraps over 160 feet around and measures almost 28 feet high. The center-hung structure also features two additional displays mounted in its interior, which offer an additional 360 square feet of active video viewing area. The center-hung video board is not only the NBA’s first 360-degree, continuous video screen, but it’s also the first arena bowl to feature HD-quality, 6mm LED video display technology to ensure true-to-life colors and dynamic details.

Fully Immersive with Ten Times the Screen Square Footage
The arena is truly an immersive digital experience, featuring over 12,000 square feet of Samsung SMART LED signage – ten times more than the old arena’s configuration. In addition to the center-hung video board, the Hawks installed more than 20 additional LED displays throughout the arena, including four massive corner video boards and upper and lower fascia displays. With more than 30.42 million individual LED pixels, these displays deliver crisp, clear content throughout the arena so that fans feel like they’re part of the action, regardless of where they’re sitting.

Upgraded Players Club Experience
The arena’s new Players Club, located on behind the team benches, is the first premium club in the NBA with fine-pitch LED video displays in 2.5mm pixel pitch. With a screen that measures nearly 9 feet tall and 32 feet wide, the space offers the energy of a sports bar with the exclusive experience of up-close views into the player tunnel and the postgame press conference area.

Industry-Leading Results with Samsung Partnership
When the State Farm Arena and the Atlanta Hawks were looking for a partner to help bring their vision of a dynamic, digital stadium to life, they knew Prismview and Samsung had the experience to make it happen. Samsung is an industry-leader when it comes to LED signage and has provided groundbreaking custom signage solutions to stadiums and arenas all around the world. The Hawks worked closely with Samsung throughout the design process to figure out the best solution for the fans.

Vibrant and Immersive Fan Experience
A huge part of the sports industry – basketball included – is the fan experience at games. State Farm Arena’s new large-scale, high-definition video displays will enhance the in-game experience for Hawks fans and ensure that they will feel like they are sitting in the front row no matter where they are in the arena. 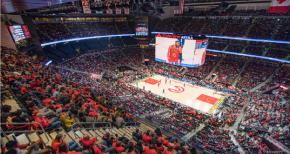 Samsung and Prismview worked with the Atlanta Hawks to transform their home court into a cutting-edge arena that offers a top-notch fan experience. The massive number of screens and amount of display square footage – coupled with Samsung’s industry-leading picture quality -lets fans feel truly immersed in the game. The new center-hung video board featuring the NBA’s first 360-degree LED screen helps ensure that this iconic venue is well positioned to keep up with the rapidly evolving sports entertainment industry.